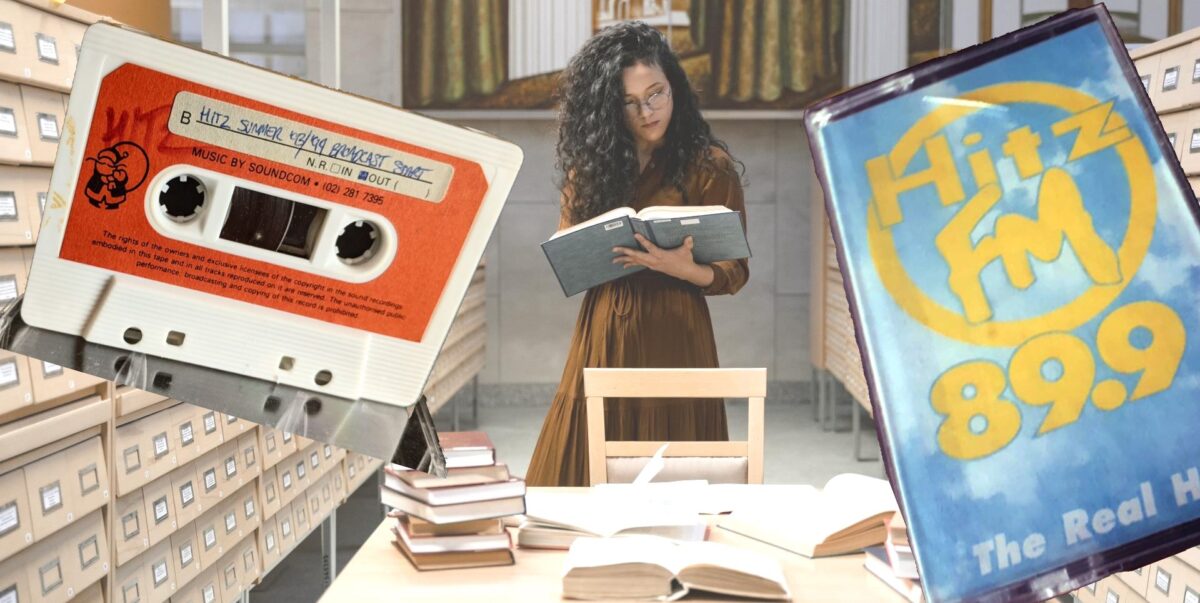 Each year, ten pieces of ‘important sound’ are inducted into the National Film and Sound Archive’s (NFSA) Sounds of Australia. But which recordings of Hitz Melbourne audio would I save? How would I decide?

Last year’s Sounds of Australia included Somebody That I Used to Know (Gotye ft. Kimbra) and the Stolen Generation Apology by Kevin Rudd.

But how do I narrow down 17,543 hours of youth radio (yes, that’s the true number) into ten essential bits of Hitz Melbourne audio? At the risk of starting a big debate, I’m going to try.

And many of them are here, ready to stream!

I will add one little cheat though – only because my resources are slightly smaller than a huge government organisation that thousands of people actively try to help. I’m not going to stick to audio ‘that I have on-hand’. If it’s truly significant and I don’t have a copy, it still goes in. My hope is that all this stuff is found one day.

Now, let’s begin…
(note – there’s no ranking to these)

1. The first ever 5 minutes of Hitz

On December 4th, 1992 at 10.07 pm – Hitz Melbourne started its first-ever transmission with what I believe was the intro to the Hot Tracks 1991 end of year medley. Anton Vanderlely (station co-founder) was hosting, and then he introduced the various announcers onair.

Sadly, this recording hasn’t been found yet. By I still hold out a tiny flame of hope. If you’re interested in the very earliest days of Hitz FM, this tape of my breakfast shift includes a few surprises.

I just couldn’t leave this out. As I explained in my special tribute post, this track was the final song for 19 of the 20 Hitz broadcasts. It began at the Xavier school broadcast in July 1993 right through to the final minutes in November 2001. There was even some drama in one broadcast when we couldn’t find the CD – and remember this was before mp3 files/iTunes/etc.

It’s So Hard was a tradition that really meant a lot to listeners and volunteers alike. You can read more about Hitz’s special connection to It’s so hard to say goodbye in my post dedicated to it.

During Hitz FM’s 2nd broadcast, Paul Dowsley was working at the Herald-Sun. One day, Paul spotted a funny* story coming in from overseas, and printed it out as he left work. As the Hitz FM bulletin started, Paul shuffled the story towards the end as he was worried about starting to laugh.

This was very wise as the story was about Lorena Bobbitt and what she did to her husband. [*NB: It seemed funny back then but we didn’t know the full story. It was an abusive relationship.]

Of course, back in 1993 we only had the barest details of the story. And what we knew was bound to cause giggling. Paul barely made it through the script as everyone in the room started laughing. But some believe he ‘broke’ the story on Melbourne radio – so surely this moment earnt its inclusion here.

I was passing through South Yarra in the Winter of 1995 when I almost drove off the road. I heard Barry Bissell on Fox FM, saying “Coming up next, The Bucketheads, with The Bomb“. What?!? On Fox? After years of classic rock, with promos including phrases like ‘no rap crap’, 101.9 had started to play dance music.

The following Summer, Fox ran a big 45-second promo called “The new sound of Summer“. Hitz was onair at the time (broadcast 7) and we couldn’t believe it. Instead of previous Summers’ classic rock tracks, they used Leftfield and Lydon’s Open Up. They added a bunch of random people saying “hits” (Hitz?) plus a female vocalist singing “The new sound of Summer”.

Within a few hours, we’d worked out how to edit the song in exactly the same way, got a similar female vocalist (to sing new lyrics) and wrote our own version of the promo. Which we played as often as possible. You can listen to it above – very few people have heard it for more than 20 years.

Hitz FM was known for funny promos and sponsor announcements, but in the 6th broadcast, James Ash and Steve “Winkleburger” wanted to go further. They wrote a six-part series mocking short-lived soaps like Paradise Beach and Echo Point.

Paradise Point was a fictional town where characters like the hunky Shep Goldsmith fought for the affections of the vacuous Chastity. Where strange drunks were found in caves “laying cable for the information superhighway” and even Batman turns up. What’s more, there was a great running gag involving Poison songs. (As you do.)

Whilst the production budget was close to zero, James and Steve’s writing shone through. Hopefully, I’ll be able to bring you this series one day.

Many songs charted thanks to Hitz. This one’s pretty special. Light my Fire (specifically the ‘noisy clouds remix’ which you can hear above) was a staple of Hitz FM’s 1993/1994 Summer broadcast. Molly Meldrum made reference to it in his story about Hitz on Hey Hey it’s Saturday.

Hitz FM’s influence on this song’s popularity in Australia was remarkable. Light My Fire sat in the Victorian top 50 for two months while other states reported zero sales.  (Hmm, why would that be?) Eventually, it started to take off in New South Wales. Maybe someone had visited Melbourne and spread the word.

Light my Fire reached No. 25 nationally (Number 24 in Vic, 9 in NSW), and remained in the National Charts for NINE months. A phenomenal run for a single, let alone a dance/pop track.

Back in March 1994, Cameron Adams wrote an article summarising the 3rd broadcast in Zebra magazine. In terms of Hitz’s ability to affect the charts, he wrote “If Take That break (in Australia) it won’t be due to BMG’s promotions push, but by people actually being able to hear Pray, Babe, and Relight My Fire [on Hitz].”

So Take That was an important act for the radio station. So much so that when they toured in September 1995, the station sent newsreader Nelly Katsnelson to Tullamarine Airport to cover their arrival. This was a great example of Hitz going ‘above and beyond’ in the news service to thoroughly cover a story young listeners wanted but other stations ignored.

As I wrote in more detail last year, Hitz FM was hacked on Friday April 28 1995. Adele Cookson and Paul Dowsley were hosting their night show – Dribble – live from Inflation nightclub.

Hitz’s dance music was suddenly interrupted by another signal from 8.30 pm. It was just momentarily at first, then in larger timeframes. They played alternative music, and then 40 minutes later – a voice, calling themselves “89.9 Pirate FM” also spoke.

The perpetrators were never found. But then only a few people would have the skills and the technology…

Thirty volunteers crammed into the studio when Paul Dowsley signed off from Hitz FM for the final time. Many more listeners called the station to wish Paul well, and thank him for his time onair. You can read more about Paul’s Hitz career and celebrity interviews in this post from last year.

Paul’s Weekend Siesta and Weekend Siesta Dance Classics shows were hugely popular. He had (and has) an immense passion for music; always keen to share it with others. Paul was onair for every single Hitz FM broadcast from the 1st – to the 12th when he retired.

Mr Dowsley is one of only 3 people to ever be awarded a ‘Hitz FM life membership’, a truly deserving recipient.

As a writer, there’s nothing more daunting than having to ‘capture a moment. To try to sum up the feelings of tens of thousands of people – especially over nine long years.

So I absolutely admire what Andrew managed to pull off. Especially when speaking in an emotionally charged environment like a nightclub. He covers the history of Hitz FM in fine form and manages the challenge of ‘not knowing what was about to happen‘ quite well.

And that – was our final entry. Have a listen above.

If you’ve enjoyed this post, I’d really appreciate a share on your social media. Even if you just email it to a friend. Every bit counts as I try to spread the word and build an audience for the eventual Hitz FM Book.

PS: If you want to stream more Hitz Melbourne audio – just subscribe here and you’ll get a quick email whenever I add a new post.