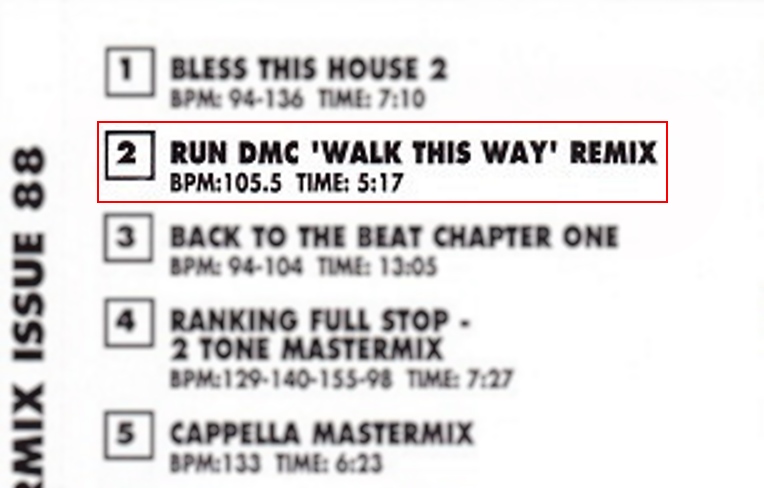 Now THIS Megamix Monday will be hard to top. The Walk this Way Megamix soon became the unofficial anthem of Hitz’s Summer 93/94 broadcast.

And yet, ‘the one megamix to rule them all’ has a super-cheesy backstory very few people know.

Follow the link below to stream the famous Walk This Way Mastermix. You’ll learn a little bit about why it made such an impact, and discover the skeleton in the closet most would never have suspected.

Why the “Walk this Way Megamix” matters

Walk this Way was once called “hip-hop’s Trojan horse“. It was a song that introduced hip-hop music to many around the world. A gateway drug, if you will. Combining Run DMC and Aerosmith back in 1987 was a stroke of genius, and even the videoclip made clear the ‘tearing down of barriers’ between the two styles of music they represented.

Six years later, Hitz FM’s Myf Webster (music director, news director, committee member and treasurer at various times) was visiting a local milkbar in Melbourne’s Eastern suburbs. There – for sale – despite the “professional DJs only” labels… were the hottest imported DJ-only CDs. Yep, grab a litre of milk, a loaf of bread, and the latest Hot Tracks, Direct Hit or Mastermix. Myf and Nick Karlas (Hitz co-founder, promotions director) would buy quite a few of them in the years that followed – including Mastermix volume 88.

And one awesome CD

This CD contained a bunch of great megamixes, including Bless this House which starts at a very cruisey 94BPM then rockets off to 136BPM. And then there’s the Walk this Way ‘Boom Boom Bootley Mix’. A medley that used Walk this Way as a framework, then smoothly mixed every big hiphop song of 1992/1993 into 5 minutes and 17 seconds of dancefloor dynamite.

Songs featured include O.P.P., Boom Shake the Room, Rump Shaker, Jump (Kriss Kross), Jump Around, Hip Hop Hooray… the list goes on. I can still remember the first time I heard this megamix – and it had an equally strong effect on Hitz FM listeners. After thousands of votes were counted for the end-of-broadcast ‘Top 89’ – it smashed its way into the number 4 position.

But only ONE Walk this Way Megamix

Hitz FM had a single copy of the CD – remember this was back in the days before CD burners and mp3s. So that disc was very carefully guarded. I think the only two times it was allowed outside the station in 3 months was (a) For a single nightclub event and (b) For the staff cruise on the Yarra river.

And now, it’s time to press play and unleash a true classic.

Now, the skelton in the closet

Finally, as promised it’s time to reveal the rather daggy ancestry of this megamix. It was produced by the very talented Andy Pickles – who’s worked in the field for many years. These days he’s the chairman of the entire Mastermix company. But back in the late 80s, he was also one of the brains behind a rather different megamix; Jive Bunny’s Swing the Mood.

This was one of the first megamixes to ever have big chart success. The difference to most though was the age of the songs. They were all from the very early era of Rock n Roll.. the 1950s (!) with tracks by Elvis, Little Richard and Bill Haley. Strangely, despite the age of the songs, it was apparently a hit in British clubs, so a cutdown radio edit was made, and chart success followed.

So now, for the one and only time on this blog – here’s Jive Bunny.

So, got any favourite megamixes?
(Hopefully not one featuring a man in a rabbit suit)


Hit me up in the comments…