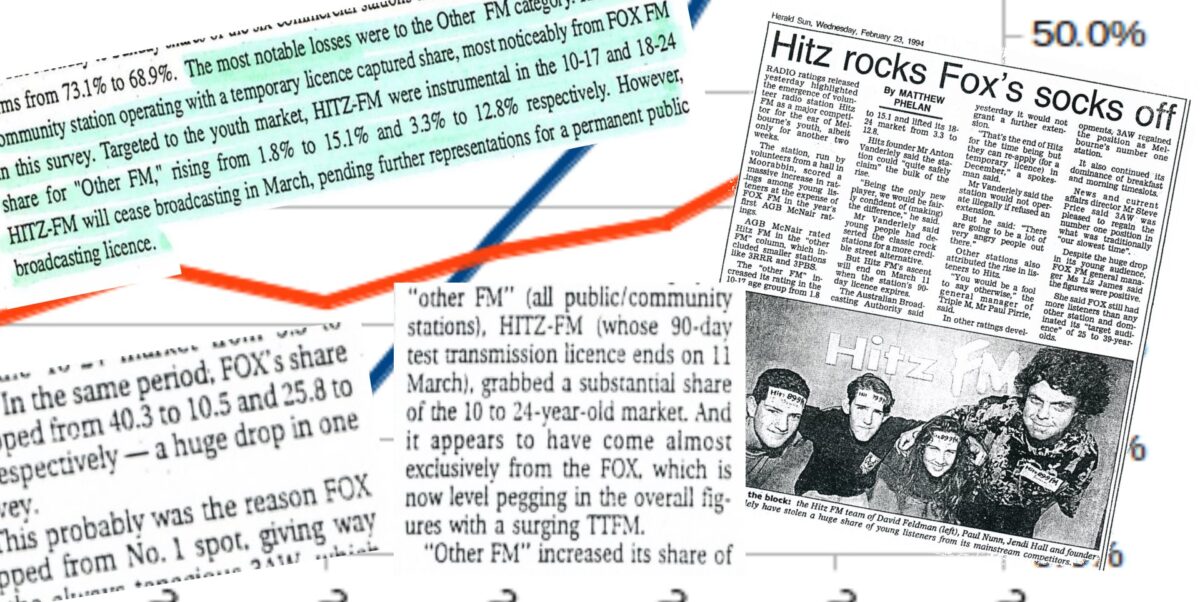 Back in Summer 93/94 the Hitz crew were having the time of our lives. We had our music on the radio, tonnes of listeners calling in, and more free pizza than we could eat. But we never suspected what would happen next. The day Hitz Melbourne smashed the radio ratings.

And it was this very day, the 22nd of February.

The ratings result came completely out of the blue. We hadn’t talked about ratings at all – we didn’t even know when the survey numbers would be released. The first thing we knew was suddenly the media was very interested in what we were doing.

The newspapers sent reporters and photographers. They interviewed our volunteers. TV news crews turned up. And if nothing else, we suddenly had to learn how the ratings system worked to we at least understood what was going on around us.

But how does this all work?

Thanks to a few of our more ‘radio nerd’ volunteers, we learnt that the survey consisted of 1,200 paper diaries dropped to households. People would be asked to ‘tick’ which station they listened to in a 15-minute slot. So that explained why the ‘big FM announcers’ would always be talking about ‘what’s coming up next’. And stations had to pay to appear in the survey – which we hadn’t. So Hitz was lumped in together with ‘all other FM stations’ (like RRR and PBS FM).

This means war. (Actually no.)

For some, when Hitz Melbourne smashed the radio ratings it seemed like the start of a ‘war’ with the commercial FM stations – particularly Fox. But that was just a perception built from cheeky promos and news articles. This was friendly competition. We’d all grown up listening to these stations. We had FOX stickers on our school bags. EONFM jackets. Some of us had met the “big name” announcers and got them to record little promos for our shows on other community stations. Many of hoped to ‘work there’ one day.

The ratings release of February 1994 ended a very busy fortnight for the station, with Hitz on A Current Affair and then Hitz on Hey Hey it’s Saturday just 10 days prior. And it very much started the media’s fascination with what this little youth station was doing.

Hitz Melbourne smashed the radio ratings, and then…

In the next few weeks the petitions started flooding in, the politicians got involved, and things got even more dramatic before the station finally ended its 3rd broadcast on March 12, 1994.

There are more photos to share, more recordings to listen to, but I’ll leave them for another day.

PS: I now have a Youtube channel. So if you want more Hitz videos and recordings, just subscribe here.