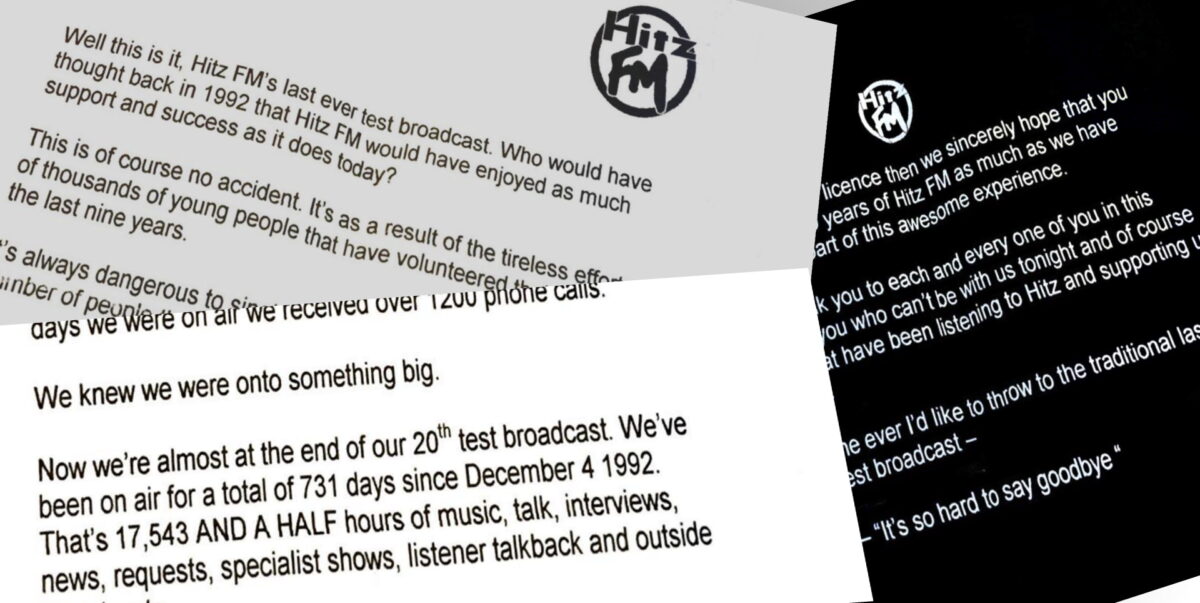 It was Melbourne Cup Day – this week in 2001. The day we heard the final hour of Hitz FM.

Not that the Hitz crew – or their listeners – were particularly interested in horseracing. But for such an important part of Melbourne culture in the 90s, its probably fitting for one of the station’s anniversaries to coincide with a public holiday.

Three months earlier, the Hitz team had stood before the ABA at the license hearing at Melbourne Town Hall. Andrew Gyopar, Julie Doyle, Rod Cuddihy, Varun Kapoor And Jerome Tse represented the station. They had 10 minutes to speak, then faced a barrage of questions for another 50 minutes. A group of Hitz volunteers and fans sat in the public gallery for support.

With the license decision likely ‘before Christmas’ that year, that had time for one final test broadcast. Test Number 20 began on October 9th, 2001. Hitz boasted a brand new cruiser. They were broadcasting from 3 nightclubs a week, and they were even streaming live to the net – which was a big deal at that time. Of course, you needed Winamp to listen in. Remember Winamp?

It was a final month on the airwaves prior to the Australian Broadcast Authority releasing the results of their license application process. A last chance for the young volunteers to show what they could do before – they hoped – Hitz might start onair as a full-time concern.

The final night was – as had been the case many times in the later broadcasts – conducted live to air from a nightclub. The venue was Odeon at The Crown Complex in Melbourne. The Hitz crew had gathered and were ready to party. In the final hours, the station played the number 1 song from every single Hitz broadcast. That’s November Rain from December 1992 all the way through to Rapture by Iio, from November 2001.

In the final hour, the hosts caught up with a number of the Hitz gang, before passing to Hitz president Andrew Gyopar for a final speech. Andrew covered the story of the station in impressive style and kept his emotions in check until the very final moments.

It was time to hear that Boyz II Men track for the very final time. But this was different. For the first time EVER, they’d added some voices over the top of the music…

(I was quite surprised and touched by what they did. You’ll see, when you listen.)

Hope you enjoy the recording. It’s a little unclear at the start then improves dramatically. It’s the final 49 minutes of Hitz FM’s life.

And there’s plenty more audio on this site from broadcasts 1 through to 19. Here’s a link to all posts with Streamable Hitz FM audio.
There’ll be more added in coming months.

One thought on “The final hour of Hitz FM”