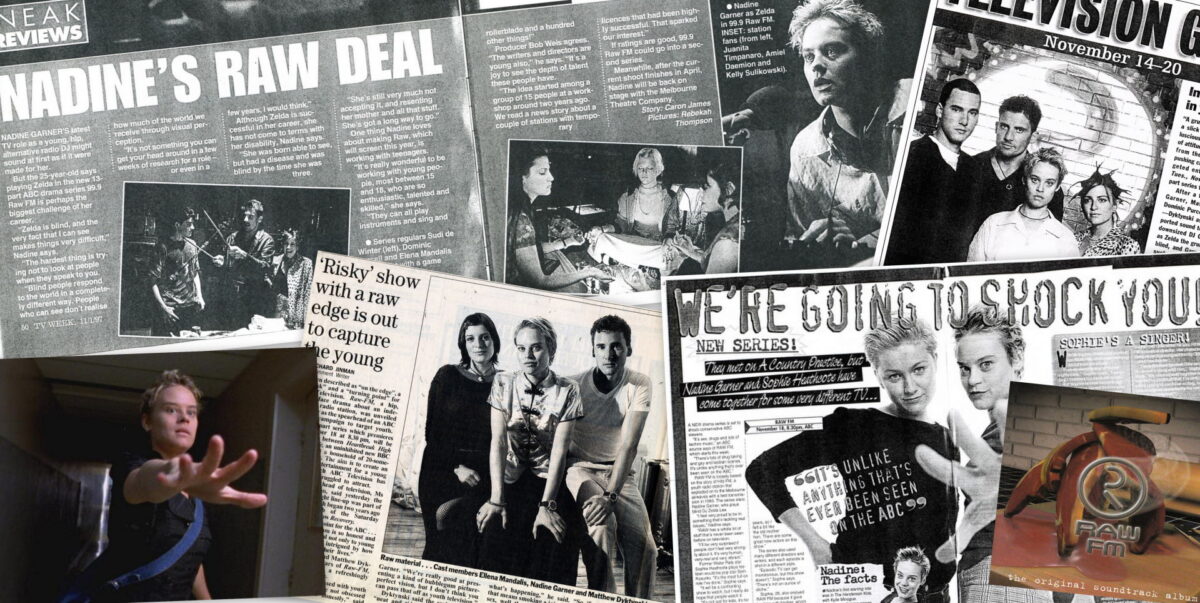 Throughout its lifespan, Hitz FM created and inspired a lot of other creative ventures and products. From their Hitz’s own CDs and Hitlist newsletters to their Hitz TV shows on Channel 31 and Optusvision. Then there were things like Raw FM on ABC TV.

This 13 part drama series was loosely based on the Hitz FM story. Raw FM debuted this week (late November) in 1997, and continued through till February 1998.

But the full tale starts a couple of years earlier.

A production company contacted Hitz FM in early 1996. They were working on a TV series ‘inspired’ by aspirant community radio stations in Melbourne and wanted to talk to us. So for a week or two, a dreadlocked researcher from the production company hung out with the Hitz crew, peppering us with questions about the Hitz saga.

Later that year, the first news of the series progress appeared in the Mediaweek article above. At that point they were talking about 26 episodes (2 x 13 ep series) and whilst Hitz got a mention they didn’t quite manage to spell the name correctly.

By early 1997, the Hitz team were mostly concentrating on the usual test broadcasts. But every now and then, little conversations would turn to this TV show that was supposedly on the way. “Will it be much like Hitz?“, “Do you think we’ll recognise anybody?“, “Which famous actor should play me?“. Well maybe there was just one of us posing the final question. (ahem).

Finally, Raw FM was announced in October/November 1997 with the show starting November 18th. The cast included Nadine Garner (who we’d all grown up watching on The Henderson Kids), Joelene Crnogorac (Round the Twist and Ocean Girl), Sophie Heathcote (A Country Practice, Water Rats) and Matthew Dyktynski (The great Aussie film Love and Other Catastrophes).

As the start date approached, the ABC’s Arts Today program called Hitz FM, asking for somebody to watch some Raw FM previews, and do a review. Soon, Julie Doyle (Hitz FM news director) took on the task. Subsequently, she received 3 episodes to watch, and invited to the ABC Melbourne Southbank studios to record her review.

Julie made clear she wasn’t overly impressed with those episodes. But the ABC – demonstrating its famous editorial independance – still went ahead and played her review the day after the TV show’s debut. The announcer even gave Hitz FM a plug for their 10th broadcast, starting December 26.

And you can listen to Julie’s full segment on ABC Radio National below.

My initial reaction to Raw FM

As the series progressed I watched it with a mixture of interest and frustration. Whilst I felt the idea of having different writers and directors for each episode was interesting, but there was too much variation. Some of the scenes of plotlines felt to me like “what adults think 18 year olds do”. As to how ‘inspired’ the series was by Hitz FM, the team mostly agreed on a few points.

One episode, titled “B4 and After” clearly took its inspiration from Peter Andre visiting Hitz FM. Also there were plot lines to do with the struggles of a community FM station. For example, people not arriving to do their onair shifts, or starting no-confidence votes against leaders. All these things are familiar.

Did anyone recognise themselves?

Many people have asked about Hitz volunteers spotting themselves or others (albeit disguised) on screen. I could see some Hitz staff reflected in the way characters were on the dole, or had a love/hate relationship with commercial radio. I thought the most obvious inspiration was the two prominant sister characters (Cara and Sarah). They reminded many of Hitz’s own talented sister duos… Lisa and Alex Kastaniotis (announcers: broadcast 2 and 3) plus Tina and Sarah Foley (announcers, music department, admin: broadcast 3 onwards).

In general, the plotlines had much more connection to Hitz FM than the characters. I found this unsurprising as the researchers visited a number of other stations including Kiss FM. The ABC only ever pitched the show as ‘loosely based’ on our youth station, so common radio challenges were more likely to crop up than familiar characters.

With a TV series about a music radio station, clearly the music was important. And Generation Films made a wise choice in getting Ollie Olsen onboard. Ollie is an electronic music artist best known for his work with Michael Hutchence (Max Q) and his own band Third Eye.

Olsen produced music specifically for the series, as well as choosing tracks by other artists to be featured. For example, the episode “Cara” (watchable below) featured Awesome Party by Pendulum, which was featured on Hitz FM’s 2nd CD. The ABC also released an official Raw FM soundtrack CD – available from ABC Shops back in the days when they still existed.

When Raw FM debuted, the four most recognisable young faces were the actors I mentioned earlier – Nadine Garner, Joelene Crnogorac, Sophie Heathcote and Matthew Dyktynski. Afterwards, Garner went on to star in a number of TV series, most notably Blue Water High, City Homicide and The Doctor Blake Mysteries. Crnogorac went onto Blue Heelers. Heathcote appeared in a number of TV series, as did Dyktynski who you may have seen in Offspring. Sadly, we lost Sophie Heathcote to a brain aneurysm in 2006.

The rest of the cast were less familiar back in ’97. But over the past two and a half decades, many have created successful careers in entertainment.

Dominic Purcell (Granger) has become a prominant actor, most notably starring in Prison Break for 12 years and more recently DC’s Legends of Tomorrow. Dan Spielman (Mark) starred in Secret Life of Us, Offspring and many other TV dramas. Elena Mandalis (Sarah) seems to have appeared in almost every Aussie TV series since then, as has Amanda Douge (Gerry), Jane Harbour (Susan) and Kick Gurry (Toby).

The ABC has repeated Raw FM once or twice , and Channel V has screened it. But currently there’s no way to watch it. I’ve never seen Raw FM on a streaming service and no DVD was released.

I found one episode on an old VHS tape – which I’ve uploaded in full above. It’s the 4th episode out of 13. (Sadly not the 1st.)

Was it too raw after all?

Raw FM completed it’s first series in February 1998. As for the 2nd series of 13 episodes, it never eventuated.

Critics were quite positive towards the show, but it’s harder now to judge how it was received by the general public. However, I do recall seeing lots of positive feedback on the official messengeboard at the time. Remember – this was 10 years prior to Facebook.

For many of the Hitz FM team, Raw FM would never quite fit the mould we’d imagined for it. We knew our own stories and characters so well; we were so invested in them, the phrase ‘loosely inspired by’ would always be a frustration.

I suppose if we really want the true story of Hitz FM’s early days, one of us will just have to write it ourselves.

When Hitz was first being put together, one of the fundraising ideas was to have a benefit concert featuring Jimmy Barnes and Angry Anderson.