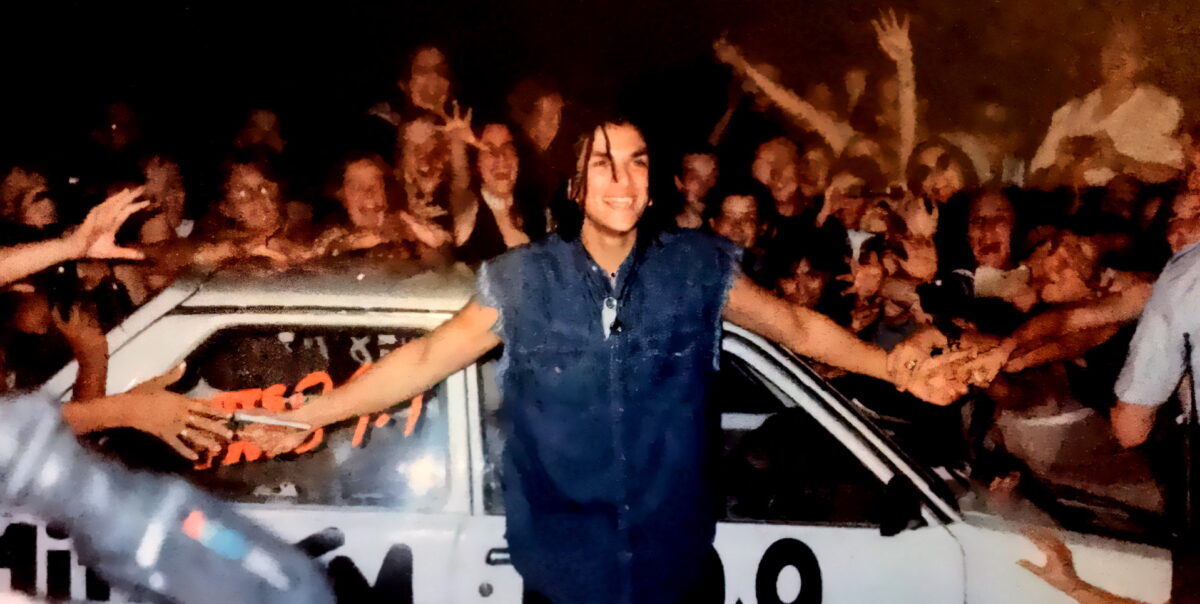 Tonight I bring you news of a February 14 like no other. And for the first time ever on GabeMcGrath.com – I’ve invited a few of my old Hitz friends to help me.

As I noted the other day in our A Current Affair post, early 1994 was a pretty crazy time at Hitz FM. We had tonnes of media coverage. Hundreds of phone calls every day.

Then one night, Peter Andre dropped in…

Gabe: I’m going to start with you Irene, because you supplied many of the great photos in this post. Thanks so much for that. Tell us about how you ended up in a near-riot when Peter Andre visited Hitz FM…

Irene: So, 1994… I’d just finished high school and had begun clubbing. Places like The Warehouse, Chevron, TOK H, Metro, Chasers. The music at that time was amazing. Then I found this radio station at the far end of the dial that was playing the clubland music I loved and I knew that I needed in.

I was known to man the phones every now and then, but my main role was Cruiser driver. The promo team went wherever we were booked and boy oh boy was it a ride! I knew Peter was coming to the station but I did not expect the madness when I arrived.

How did it happen?

Gabe: Now, Myf you were our Music Director at that stage. How on earth did we manage to get the guy with the highest-selling single the previous year – to our little radio station?

Myf: Well, it was all Molly. [Molly Meldrum had visited us a few days prior, and Peter Andre was signed to his record label Melodian] I didn’t expect a huge reaction, I don’t think I’d realised just how big we were from my little cave [the music library] next to the studio.

To me, Peter Andre was “abs”, Gimme Little Sign and Funky Junky. I figured he’d be… a bit of a media opportunity; maybe the record label would rustle up some hardcore fans..

Gabe: Now Glenn, as our Power 20 host, you were interviewed by Molly for his Hey Hey it’s Saturday story..

Glenn: Yeah he’d just flown back into the country. He saw us affecting album sales, affecting single sales.. so he got on the phone to Peter Andre right there and then and asked him to come in – it would have been only three or four days notice. And Peter Andre was pretty big back then..  we were playing him a lot…  He was in like, Smash Hits Magazine; quite the pinup idol of the time.

Gabe: And Matty, you and Glenn knew each other before Hitz didn’t you?

Matty: Yeah I worked with Glenn at the local skating rink. We both wanted to be presenters and during the Summer 93/94 broadcast I got to host the 12pm till 1pm lunch hour. And most of the announcers came along on this night.

It’s bigger than we expected…

Gabe: I want to talk about the buildup. When did everyone realise this was a much bigger thing than expected…?

Glenn: Well, that afternoon I arrived about 4-4:30. There was already say, 50 or 60 listeners, mostly girls with their Peter Andre posters in the carpark. I thought.. “That’s nice. Might be good to go out for a photo op, with him.” But by 6:30 / quarter to seven, the little car park in Station Street was ‘chockers’. I think we had or would have been easily at least three to 400 people in the car park. With four or five security guards to usher him in.

Irene: Thank goodness we had security! The only time I’d seen that sort of hysteria was when Jason Donovan came to Southland! 😂

So many of them. Did they all listen to us? I remember thinking… “Hells bells, we are huge!” Where on earth did they come from?

Matty: The trains! I was out the front prior to his arrival, watching girls walking to the radio station from train after train! Heaps caught the train to Moorabbin – to be there early. They HAD to be there, for when Peter Andre visited Hitz FM.

Gabe: So Peter made it inside through the crowd, and sat down in the studio..

Glenn: It was surreal having someone who was such a big name sitting 3 or 4 foot away from you… We had the “power 10” that night instead of the Power 20, so we had enough time to speak to Peter and play his new stuff – we were given pre-release on his new album – to play it.

That is NOT toughened glass…

Gabe: But the crowd just wouldn’t calm down…

Matty: The banging on the windows and door once he had arrived. I’ve never seen such madness! Was so loud too!

Glenn: People were just smashing the absolute smithereens out of the glass. It wasn’t like it wasn’t bulletproof or anything like it was just normal domestic inch thick glass.

Irene: It was teenage hysteria on a mass level. I was kinda a bit afraid a couple of times as it was getting out of hand and I’m pretty sure Peter was a little scared too.

Gabe: But eventually Peter’s time onair ended, and he moved into the main office area, a bit further away from the fans..

Can I get a photo?

Irene: He was really lovely and polite. He made his way around the room and took time to say hello to almost everyone.

Matty: He was actually extremely friendly and happy to sign stuff and do promos for the station. Same with Molly Meldrum.

Gabe: Eventually after he’d done all his photos and autographs, Peter Andre headed ‘out back’ again, surrounded by security. The screaming increased, the mob surged, but somehow he was able to leave safely. It was over.

Irene: The night was electric, it was such an amazing time of my life and I felt super proud and grateful to have been a part of it.

Matty: It was one crazy night and also Peter’s 21st birthday that day!

Myf: It was the first time I’d really realized Hitz’s power. With my 2021 advertising hat on, I’d kill for that reach and frequency and influence.

Gabe: Massive thanks to Myf, Matty, Glenn and Irene for answering my bothersome questions on the internet. I think the final word should go to Glenn “Glen 20” Hampson – the guy in the pressure cooker as the fans pounded the glass. On this night – Valentines Day – 1994.

Glenn: It was the only radio station event I’ve been involved with, where there were two Mr. Whippy vans in the car park.