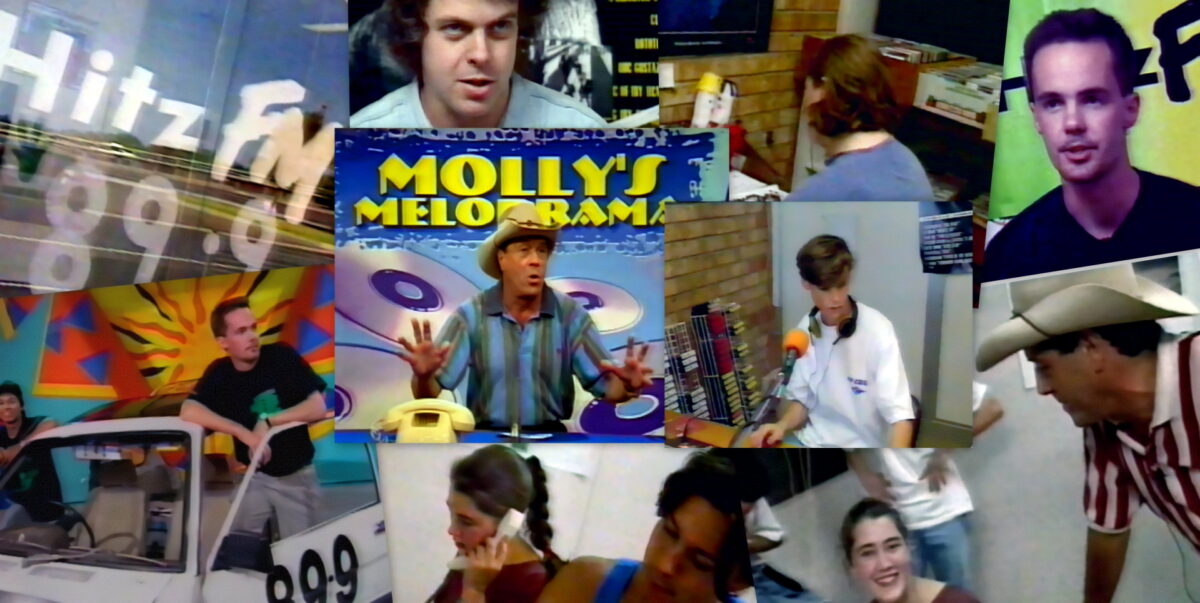 As February 1994 began, Hitz FM’s Summer 93/94 broadcast started to really take off. There were articles in the Herald Sun, along with street press faves Beat and In Press. Then within 24 hours – two major bits of national publicity. We saw Hitz FM on A Current Affair. Then the next night – Hitz on Hey Hey it’s Saturday.

And I’ve got the full segment below to watch.

Of course, Molly Meldrum and Hitz FM Melbourne were always going to be a good fit. He’d been championing new music for decades. So when a bunch of kids decided to play brand new music across Melbourne – it was no surprise that Molly was supportive. What we didn’t realise – was HOW supportive he’d be.

Within a month, he’d written about Hitz multiple times in his TV Week column. Through his record label (Melodian) he’d sent one of his star acts to the station. And when Peter Andre visited Hitz FM – it caused a near riot.

He wants to interview… us?

But Molly wanted to do much more than that. He asked to visit the station, and talk to the volunteers for his first segment of the year on Hey Hey its Saturday. We were absolutely blown away. This guy that many of us had grown up watching on Countdown interviewing the likes of Madonna and Michael Jackson now wanted to interview us. It was truly surreal.

So Molly visited the 89.9 Hitz FM Melbourne studios. He spoke to people like Anton Vanderlely (Hitz co-founder) about the reasons for Hitz’s existence. Glenn “Glen 20” Hampson spoke about why the station had suddenly struck a chord with minimal advertising. And Molly asked the phoneroom volunteers about what it was like to have 4 telephones going crazy all day.

When Darryl Somers threw to Molly for his first report of the year – he wasn’t sitting at his famous desk. Instead, the Hitz FM cruiser burst through the Hey Hey studio doors – with Molly leaping out of the back. Who could believe our little vehicle – from Melbourne’s Cheapest Cars – was now on millions of TVs around Australia.

Molly explained his entrance, about the background of Hitz Melbourne – then threw to the story. It was built around the videoclip for Dr Alban’s current smash (I’ve previously explained Hitz’s links to Sing Hallelujah). We saw the station exterior, onair studio, and of course the staff interviews I’ve already mentioned.

So many viewers – so little sleep

As I mentioned earlier, Hitz Melbourne had TWO lots of national coverage within 24 hours. ACA the night before (Friday), and then Hey Hey it’s Saturday. I was actually onair at the time, and recall saying “…hello to all of you new listeners who’ve just joined us…” with a corresponding pickup in phone calls.

It was a great promotion of the station, though some aspects of the coverage annoyed me. In particular – Darryl’s mocking of Anton when he was clearly operating on very little sleep. Of course Molly – ever the gentlemen – sees where Darryl is heading with the conversation and tries to steer him away.

But that’s my take – I’m keen to hear yours!
Enjoy this piece of history and maybe drop me a comment below.