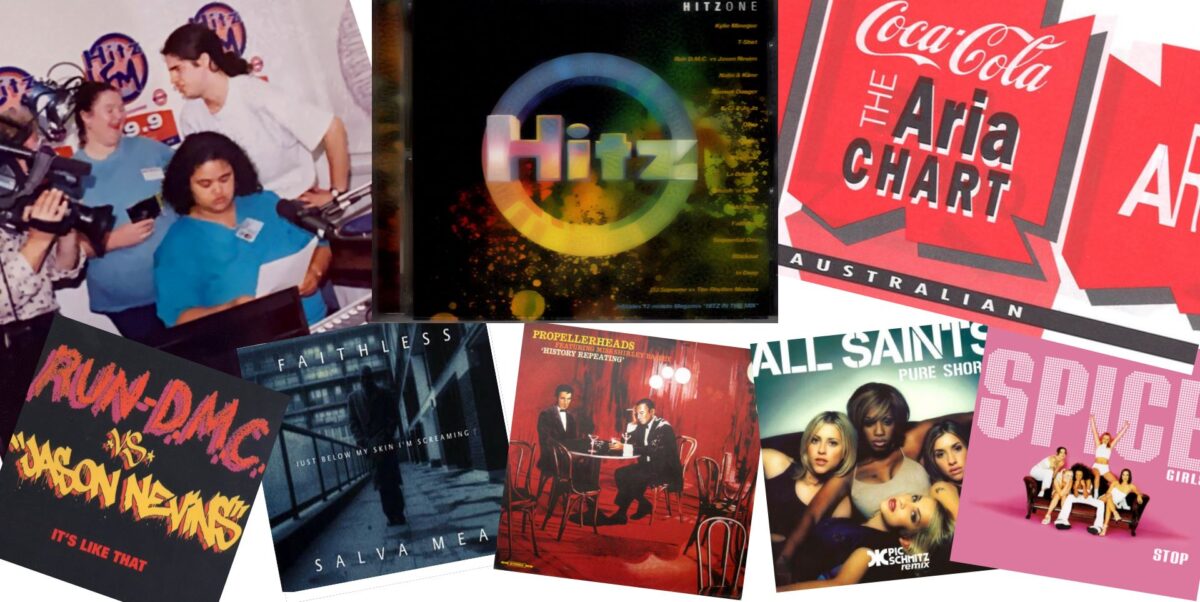 Let’s jump back to April 1998. It wasn’t just the time of Hitz FM’s 14th Broadcast. It was the era of It’s Like That (Run DMC/Jason Nevins), You make me Wanna (Usher) and Frozen (Madonna). At the movies Titanic was finally ending its mammoth run, to be replaced by Good Will Hunting and The Wedding Singer.

It was a great time for music. Following the growth of Eurodance and R&B/Hip hop in 1993/1994… pure ‘pop’ had burst forth in the years that followed with the likes of Britney, Spice Girls, Backstreet Boys, 5ive raiding the charts.

In the clubs, the awesome tracks just kept coming. Artists like Faithless, DJ Supreme, Olive, Smash n Grab, Lustral, Boris Duglusch and Luce Drayton kept us glued to the dancefloor. And of course – they provided plenty of bangers to play during Hitz FM’s 14th broadcast.

The CD and that BIG recording

April 1998 was also the time that one of Hitz’s most historic CDs was released – Hitz ONE. It was the first release with a megamix. The first to go to two discs. It set a new standard and many other aspirant FM stations followed suit. I gathered a few of the team to spill the beans on how the disc was put together, in my Hitz ONE CD post last year.

Now, onto the recording. I’ve pieced together 5 separate recordings (2 full cassettes – side A & B) plus an extra half cassette. You’ll also hear something that was rarely captured back then – the 40-minute ‘pre-roll’. That’s when Hitz would play songs and automated announcements in the half-hour before a broadcast began. Well TODAY – you can hear it.

After the pre-roll, you’ll hear legendary Hitz announcer Adele Cookson start the show, as she did for many broadcasts. Adele’s first track is the first-ever Hitz FM megamix (from the CD mentioned above). Over the next 3 hours, you’ll hear Adele play The Propellerheads, Hysteric Ego, Jamiroquai, All Saints, Backstreet Boys, Kylie and a tonne more.

From 3hr 39mins in the recording, you’ll hear the Hitz FM news, then Olivia Belvedere (who hosted Drive for the first 2 weeks, before James Ash returned). You’ll hear Olivia play a tonne of great tracks from the likes of Wyclef Jean, Run DMC, Natalie Imbruglia and more.

Hope you enjoy this massive recording, featuring another first – Olivia’s first-ever ‘Lolloping Lizards’ competition. What’s that? Have a listen in the last hour, and all will be revealed.