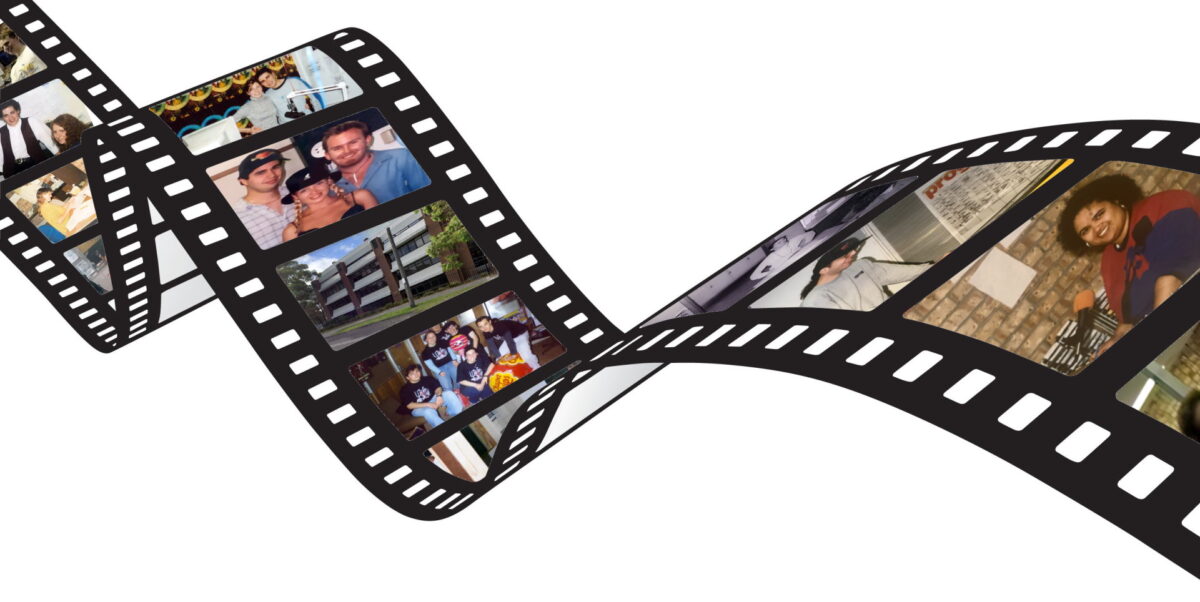 Although most listeners interacted with the station via phone (or fax!) requests – many visited the Hitz Melbourne studio to pick up prizes, have a look around or even volunteer.

More than just a building – each location had an impact on the young staff working there. So I thought you’d like a bit of a peek into the places – and faces – of the four Hitz Melbourne broadcast locations.

The first-ever Hitz broadcast happened from a High School. We chose John Gardiner Secondary College in Hawthorn because the main building was quite tall (and on a hill). That’s because FM antennas need to be ‘as high up as possible’. It was also reasonably close to public transport so non-driving volunteers could get there.

As I mentioned in a previous post about our first Breakfast show, the initial Hitz Melbourne studio was a tiny stationary office. Our newsroom and production space was the home economics room. As the year 12 students had already finished for the year (early/mid December) that part of the school wasn’t too busy.

Whilst the studio was a bit cramped, the Hitz team were very happy to have any space (let alone one that was rent-free). So John Gardiner Secondary College served its purpose.

When Hitz FM returned for a second broadcast (July 1993) the location was again, a high school. This time we’d gone a little upmarket and borrowed some space at Xavier College in Kew. Our studio was a small brick-walled room (not exactly ideal in terms of ‘echo’). We brightened the place up a little with some posters, and used a large room divider to block outside noise.

The news team got their own classroom, with a small TV (with ‘Teletext’ for news stories), plus a couple of typewriters and a phone. Initially, the newsreader would go into the main studio to read the news, but later they created a small ‘voicebooth’ in a corner of the newsroom.

For Hitz’s 2nd broadcast, our phone volunteers and music library got their own space, separate from the studio and newsroom. There were two phones for requesting songs (famously in “tacky green” and “tacky orange”) plus a borrowed computer for searching our CD library.

Throughout the two weeks onair, the Hitz team started to hang out in the admin area (the studio and newsroom being considered ‘more serious work zones’) and many friendships were made. It was the middle of a Melbourne Winter so hanging ‘outside’ just wasn’t an option.

When Hitz FM made the jump from a 1 or 2-week broadcast – to 60 days – we needed our own space. Borrowed rooms in a high school just weren’t going to cut it for an extended period. We looked at a number of options, including former State Bank of Victoria buildings, before finding an ex-Department of Housing office in Moorabbin.

At last, room for all.

At last, the Hitz crew had areas for everyone. A huge main room housed the admin (incoming phone calls, request compilation and music library). Offices at the front of the building meant the station manager and sponsorship coordinator had a quieter space.

The news team were initially in the main room but moved to a smaller office some distance from the excitement of the incoming request calls. There were now many more young journalists, along with improved equipment like a computer for writing stories.

The Moorabbin building also included a dedicated ‘tech room’ (for all the gadgets that make the music work), and a production room (for creating sponsorship announcements and comedy sketches).

At the rear of the building was the onair studio. This was the scene for many memorable moments like the Peter Andre interview that lead to a near riot, and of course the final hours of the history-making Summer 93/94 broadcast.

It was a small brick room, far too hot in Summer and frequently the place to ‘hide and gossip’ when people were trying to do a radio show. But most of all the Hitz Moorabbin studio was a place where Melbourne discovered a new sound to hear.

But it was only temporary. Hitz had to find a full-time home.

The youth station needed long-term premises. Somewhere central, near public transport and cheap. This would have been an impossible combination except for a member’s family being involved in commercial real estate. And in late 1994, Hitz FM moved to level 7, 505 St Kilda Road

Because the space had lots of smaller rooms, the station was able to dedicate more areas to the various departments. The promotions department got their own room at last. There were rooms for a large music library and a proper reception area for receiving visitors.

With the station going to air more often (around 3 times per year) it was important to have space for both ‘onair’ and ‘offair’ periods. A large room was used for training and meetings.

As Hitz was consistently broadcasting for 24/7 periods, new facilities were added for volunteers to use. There was a ‘Snack Shack’ food vending machine and the all-important pinball machine. (It was called ‘Party Zone‘ and we named the various characters in the game after Hitz staff including Paul Dowsley, Julie Doyle and Nick Karlas.)

Time to get serious

The St Kilda Road building also gave Hitz a chance to have a large dedicated production studio. This was used for the many sponsor announcements, plus comedy sketches (like the infamous Paradise Point) and recording guests when they visited.

Finally, the city location for Hitz FM gave the station a chance to build a new permanent onair studio. This meant proper soundproofing (less chance of hearing the outside world through the microphones) and a separate news booth so the newsreaders had their own space.

From late 1994 (pre-broadcast 4) through to late 2001 Hitz FM lived on the top floor of an aqua-green building on St Kilda Road. Thousands of hours of amazing radio were created. Hundreds of volunteers got experience. Many songs were sent into the charts by ‘the little radio station that could’.

And over it’s nine year life, each different Hitz Melbourne studio gave the station a different feel. From a bunch of kids causing chaos in borrowed classrooms, to the slightly more organised group in a tower in the city. More than just walls and rooms – there were memories created.

And Melbourne radio would never be the same.

PS: first-time visitor? You can get future Hitz FM Melbourne memories emailed to you automatically. Just click this button.
Would your friends enjoy this post too?