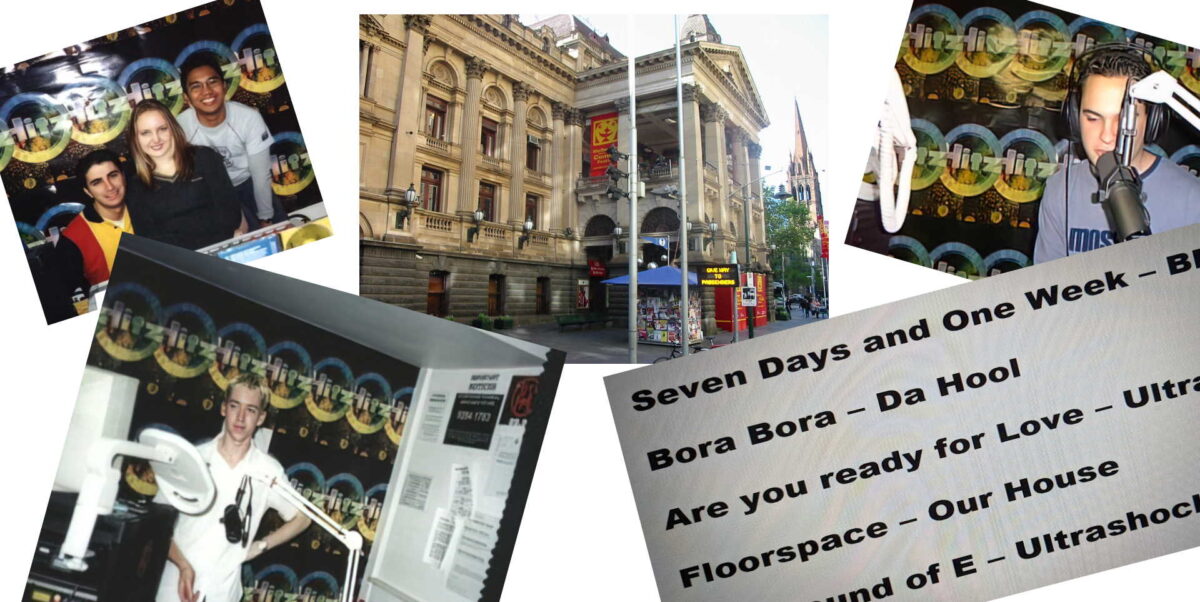 Back in 1998, it was a pretty awesome Queens Birthday Sunday night. In fact, the whole weekend on Hitz was big. They were giving away prize packs every hour to new members.

And you’ll find a TWO HOUR recording to stream below, including an hour of The Warmup with Shannon Yates “playing some of the harder sounds”.

But first, let’s jump into our time machine…

This week in ’98, the station was just one week from ending a massive 14th broadcast. At this time, Hitz favourites like Captain Turntable, Olivia Belvedere, James Ash and Paul Dowsley were really hitting their straps. The station’s first-ever Double Hitz CD was a huge release on both the airwaves and the charts.

Hitz FM was also getting involved with more big events. In conjunction with Beat Magazine and MTV – they presented Run DMC live at The Metro. Run DMC! Sadly I haven’t found any audio/video from that event, but I do have a great clip below from their previous Melbourne visit (featuring a very “1988” Alex Papps).

The station’s End of Broadcast party was also bigger than the previous events. There was an all-ages event held at Melbourne Town Hall, including the “Hitz FM 1998 Dance championships”. James Ash, Olivia Belvedere and “Captain Turntable” (Corey Layton) were handling the CD players and mikes for the afternoon.

ALL kinds of music

Listening to the Queens Birthday Sunday night recording below, there’s some interesting stuff. (And I don’t mean the shocker from Aaron Carter, one hour in. Urgghhhh.) First of all, The Warmup goes in pretty hard (musically) for 6pm on a Sunday night!

At the other end of the scale, Metropolis mixes interesting youth news (gigs, TV shows etc) with some serious cheese including the ‘Movie samples’ version of My Heart Will Go On. Plus a track I’d long forgotten – Luv’d Up by Crush (again, remixed by Motiv8 but sadly nowhere as good as Jellyhead.)

The other thing I found hilarious in the recording was the segments with the phoneroom – reading out listener messages. Just like the Academy Awards, Hitz FM had forever struggled with ‘people talking too long’ – and came up with an identical solution. There’s some pumping music playing under the phone volunteer, but as their time runs out – a bunch of telephone noises start playing to strongly hint they wrap up!

Broadcast 14 showed a genuinely confident bunch of young people putting on some great entertainment, and having fun.

Enjoy the recording below.
PS: Good luck winning one of those ‘Channel 10 prize packs’ with a Party of Five sticker.