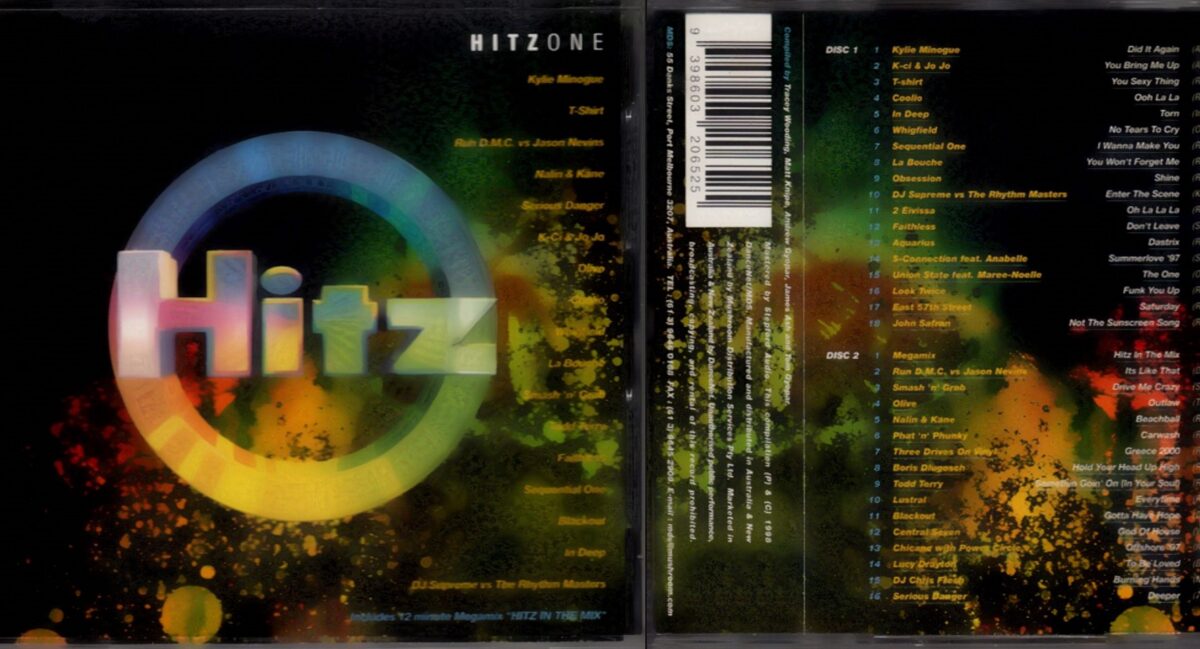 On this day in 1998, the Hitz CD series had a ‘reboot’ of sorts. No more ‘Original Hitz’. No more single CD releases. The Hitz One CD modernised the series, going to a two disc format, and adding an exclusive megamix with each release.

Today we look back on this historic CD, and I’ve invited a few of the team who put it together to share some memories.

Disc 1 was a really broad view of the music of early 1998. Ranging from Kylie’s Impossible Princess-era indie pop of Did it Again to the delightful pop-trance of Whigfield’s No Tears to Cry. From ultra-cheese covers like T-Shirt’s You Sexy Thing to urban tracks like Coolio’s Ooh La La. From the beautifully gentle Don’t Leave (Faithless) to the hilarious John Safran and his Not the Sunscreen Song.

The Hitz One CD gave a much better view of what Hitz was playing, compared to previous single-disc releases. That’s not to say the usual club tracks weren’t present – they were mostly confined to disc two.

I caught up recently with a few of the Hitz team who were involved in putting this CD together. Firstly, I asked Andrew Gyopar how these releases were usually organised. “Our normal system for these compilations was to start with a big ‘wishlist’ of tracks. Generally we’d request twice an many tracks as we needed from the record company and pick the “best” from the list of permitted songs. I remember getting quite excited that the songs by Kylie & Run DMC were cleared. I don’t remember any that we requested that didn’t get clearance but there were probably quite a few.“

This time the Hitz team had something new – a megamix. “Getting clearance for the full tracks of songs in the megamix added an extra level of complexity (and more time) but MDS managed that.” Andrew explained. “When we worked on a CD the Hitz music/programming team would put to together their wish list and I would meet with the record company weekly as they worked on getting clearance, then artwork, marketing etc.”

As previously mentioned, Hitz One was the first Hitz FM CD to feature a megamix, and the person who put their hand up was James Ash. I asked James recently about his memories of this megamix, ‘produced in Twang Vicarage studios’. [James often added quirky little names to things] “Wow! I just checked the track listing on this! So many familiar songs. I do remember doing the Megamix for this and not really knowing what I was doing that well (precedent there…).”

James also added a terrifying twist to the tale. “I recall it was the day before the megamix was due… and my hard drive failed! I thought I’d have to start again- but then remembered I’d backed up.”

Tracey Szymanski also helped to put Hitz One together, and she recalls lobbying pretty hard for a particular song to be included. “I really pushed for the Union State track [produced by James Ash] as I was a big fan! And yes, I also remember the excitement of Kylie and Run DMC being cleared.” Tracey also gave some insight into the cover design, which was another evolution compared to earlier Hitz CD releases. “Yeah, we were hoping for a cover that was a little ‘cooler’ than some of our previous ones. I think we went back and forth with MDS with our suggestions until we got this ‘paint splatter’ look that we ended up with.”

Hitz One will be remember as a very successful reboot of the Hitz CD series. A release with two discs, a megamix, an iconic cover design and incredible variety in the track listing. If you have any particular faves in the list, please sing out in the comments.