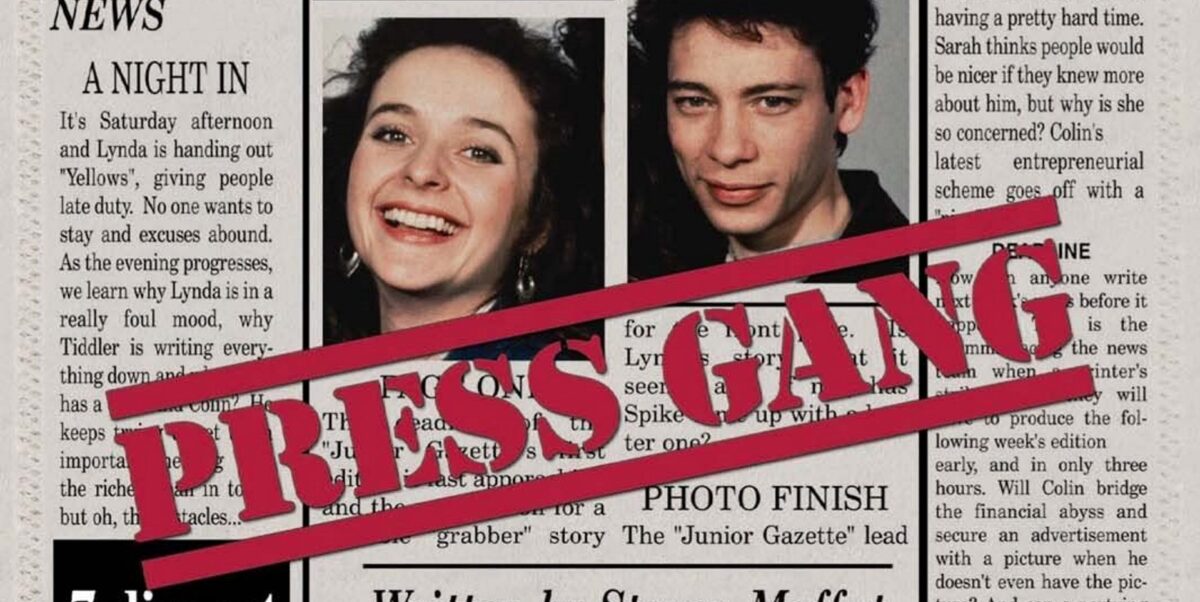 For many Aussie kids in the 80s, watching ABC TV after school was an addiction. Monkey, Star Blazers, The Goodies, Inspector Gadget, Secret Valley, Astroboy, Metal Mickey, You can’t do that on Television. And then, there was Press Gang.

This show hit our screens just as the 80s were ending. A story of a bunch of schoolkids making their own little splash in the world of media. Becoming more sucessful than the adults imagined. Hmm, reminds me of another story…

Today’s post is the first of a series called The DNA of Hitz. We’ll be saluting shows, films and books with strong echoes of the Hitz FM story.

Press Gang was created by Steven Moffat – an ex-teacher who later went on to write and produce a number of well-known series including Dr Who and Sherlock. Bob Spiers directed more than half the episodes, having previously directed the second series of Fawlty Towers – so we’re talking serious talent behind the camera.

But for 17-year-old me, it was the talent in front of the lens that mattered. Press Gang was all about Lynda Day (Julia Sawalha – who went on to play Saffy in Ab Fab). She edits the Junior Gazette – the school newspaper in a British high school. Other students are recruited, either for their talent or to keep them busy and out of trouble. Spike Thompson (Dexter Fletcher – in recent years he directed Bohemian Rhapsody and Rocketman) is an American troublemaker and the ‘worst’ of the bunch. But soon the sparks start to fly…

Press Gang: Why it was so utterly unique

Press Gang did a whole lot of the usual ‘youth TV’ things – but so much better than shows before or after it. They did the occasional issue episode (child abuse, gun violence, subtance abuse) but the writing and plotting was superb. There were a mix of boys and girls in lead roles but much more interesting than the cardboard cutouts of most kids TV. Every cast member had differing and memorable character traits – and more importantly – a real job to do on The Junior Gazzette.

If Press Gang’s writing and production quality was above average – it’s sheer unpredictability was through the roof. So many of those modern TV episode tropes (like dream sequences and ‘Bottle’ episodes – where the characters are all stuck in one room for dramatic effect) were in this kids show in 1989. Some characters went away, only to return in later series. There were big ‘cliffhanger’ two parters – and a few characters even died. Viewers were never treated like idiots; problems were frequently NOT solved neatly in a single episode.

But what’s the Hitz FM connection?

There are tonnes of reasons why Press Gang deserves a mention as a distant inspiration for at least a few of the Hitz FM crew. And why it feels like such a strong parallel story – despite the different location (The UK) and media (a newspaper). But I think it’s best said by its creator Steven Moffat.

Last year Moffat was interviewed for a fascinating article on Den of Geek and explained his understanding of what kids wanted in a TV show. Eerily it very much echoed the Hitz FM experience.

Steven Moffat, re the themes and attraction of Press Gang

Press Gang has a special place in my heart; it’s a show my wife and I both loved as teens (possibly with a crush on either main charater). And there was great joy when we discovered our mutual interest years later. Even now, I’m excited because my own kids are almost ‘old enough’ to be intoduced to it. If you weren’t aware of Press Gang ‘back in the day’ – I do hope you’ll give it a go now.

Sadly, at the time of writing (April 2021) there’s no way to stream Press Gang in Australia. Britbox (UK) has it, whilst Britbox (Aus) does not. Although the DVDs were easy to get about 10 years ago, these days I could only find Amazon Australia with current stock. But I have found an answer for you.

If you’re interested in a no-risk introduction, you can enjoy the first 3 episodes below thanks to a kind Youtube uploader. PLEASE NOTE – you’ll need to click on the little ‘Watch on Youtube’ icon (it opens a new window).