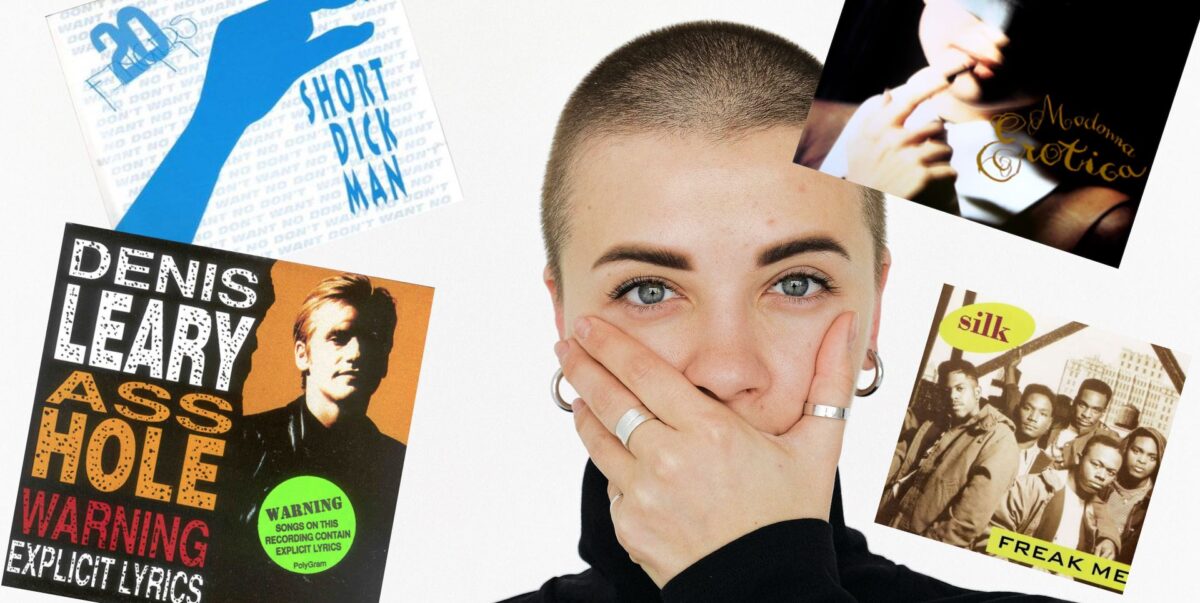 If a youth radio station’s 100% approved by parents – is it a real youth station? That’s what I thought to myself as I gathered these Controversial 90s songs.

Hitz FM certainly didn’t set out to shock or offend. But if we thought our audience was going to like a track, you can be damn sure we played it. Especially if the requests were rolling in. And throughout our 9 year run, we played… some… doozies.

Now, for our first ever Top 9 at GabeMcGrath.com – I’m counting down the nine naughtiest tracks we ever played. It’s all about sex, drugs and dancepop music.

Click if you dare – and beware if you’re playing these tracks at work.

The early 90s saw an explosion of urban music styles on the charts… from New Jack Swing to Soul to R&B. In 1992/1993 groups like Boyz II Men and Silk started to really find success in Australia, and Silk’s biggest ever hit was Freak Me.

It was a potent mix… of late 80s keyboard, boyband harmonies, far-too-serious spoken-word verses and lyrics involving whipped cream (but not a birthday cake in sight). Out of our whole top 9, it’s probably the sexiest controversial 90s song.

Freak Me was cowritten by Keith Sweat who had a big hit two years later with Twisted, and it seduced its way to number 31 in Hitz’s Summer 93/94 Power 89 countdown.

OK, hear me out. Unlike most tracks in this list there’s no swearing, no drugs or sexual references. Nothing for politicians or AM radio announcers to complain about. But when Hitz FM played this track it DID cause some ripples. But first, some background.

Most songs you hear on the radio are the ‘radio edit’ versions – specifically designed for radio use. But Hitz FM played lots of “DJ only” remixes over the years, which (a) Often sounded better and (b) Was breaking the terms of service of the remix companies.

In the case of Frente’s Bizarre Love Triangle the official version of the song was a two minute folksy vocal over an accoustic guitar. We had no interest in that. But then we discovered the Direct Hit remix and started playing it. Tonnes of people demanded THAT version at music shops; which they couldn’t buy – instead of the ‘official’ release, which they could. Things got messy. And the record company made their displeasure loud and clear.

Look, I’m kind of including this one just to prove it was a REAL SONG and I didn’t imagine it. Def Dames Dope were a Belgian group who sounded a little like Salt n Pepa and were produced by the two guys who created 2 Unlimited. They had a small hit with It’s OK, It’s Alright which I loved playing at parties and I might have snuck into the final hour of the all-important 3rd Hitz broadcast.

Then one year later, they released Don’t Be Silly.

Wow, what a video. There’s the lyrics, which make it sound a “youthy” government safe sex campaign. There’s the cheesy dance moves and then there’s the ummm…. early 90s CGI “Willy” character.

Hitz FM played this ‘song’ during our 4th broadcast (but not too many times!) and for that… we sincerely apologise.

Oh dear. I always thought the producers of THIS song were destined to go straight to music hell. It’s a one-joke track stretched out to 3 and a half minutes (or even longer – no pun intended – for the club version).

But after researching SDM, I see that it was apparently written as a bit of a clapback to the misogny that fuelled many early 90s hip hop tracks – eg Rump Shaker and Bump n Grind.

So, it may be a terrible song with its heart in the right place.
Perhaps.

Do you *twist* as good as you dance?

That was Wayne G’s question back in 1998, although the club version used another word instead of twist…

Personally I found the track pretty creepy, and the ‘club toilet’ themed videoclip was even worse. But fear not, the music improves as we get closer to the coveted number 1 spot…

I don’t think it’s possible to explain how… EVERYWHERE… Madonna was back in 1991-1993. She released her Immaculate Collection compilation, selling millions of copies. Her film In Bed with Madonna hit the cinemas. She released a (physically) huge coffee-table book called Sex, and an album/single called Erotica.

It’s the last one that earns Ms Ciccone a mention today. A song that might have been party inspired by another S&M-themed hit a year earlier. Erotica was of course just one of Madonna’s many provocative and controversial 90s songs – and a big part of Hitz FM’s first broadcast back in December 1992.

Over the years, Australia’s crappier newspapers (the ones using bigger photos and smaller words) have run many ‘shock horror drugs’ type stories. But somehow… this one slipped through without being noticed.

Ebeneezer Goode. That song they kept playing on that station the kids liked.

The Shamen released a few great singles and albums over the years – Destination Eschaton was a fave in Hitz FM’s 6th broadcast. But none as catchy or cheeky as Ebeneezer Goode. Although theoretically the story of an old man who turns up at raves to cheer people up… you only need to pay a litle more attention to the lyrics to notice ‘Eeeezer Goode’ sounds very similar to “E’s are Good!“… which is a very different message.

Ooooh big conundrum here. Do I put this song in THIS top9 – for being controversial… or a later one… for being a novelty track?

Detachable Penis is not a sexy song like Erotica. It’s not trying to be offensive like Twisted. It’s just… ridiculous. It sounds more like a deadpan standup comedy routine than a song.

And back in 1993, when Hitz FM was broadcasting from Xavier College (a very traditional school in Melbourne’s wealthier Eastern suburbs) we played this song as much as possible. Not to stir trouble – just because we thought it was funny. More songs should go on the radio for just that reason.

Finally, we’ve made it.

AND DIDN’T… OUR… LISTENERS… LOVE IT.

We simply SMASHED this song throughout Hitz FM’s epic Summer 93/94 broadcast – and if we didn’t play it enough already, it was a constant request. So much so, that Mr Leary found himself at Number 10 in our Top 89 of the broadcast. Asshole beat massively popular songs like What is love (Haddaway), Dreams (Gabrielle), Sing Hallelujah (Dr Alban) and It’s Alright (East 17).

And for this reason, it’s a most deserving winner of my first ever Top9 countdown. The top 9 Controversial 90s songs.

So – did I miss any controversial 9os songs? Got any stories about the songs above? Hit me up in the comments.