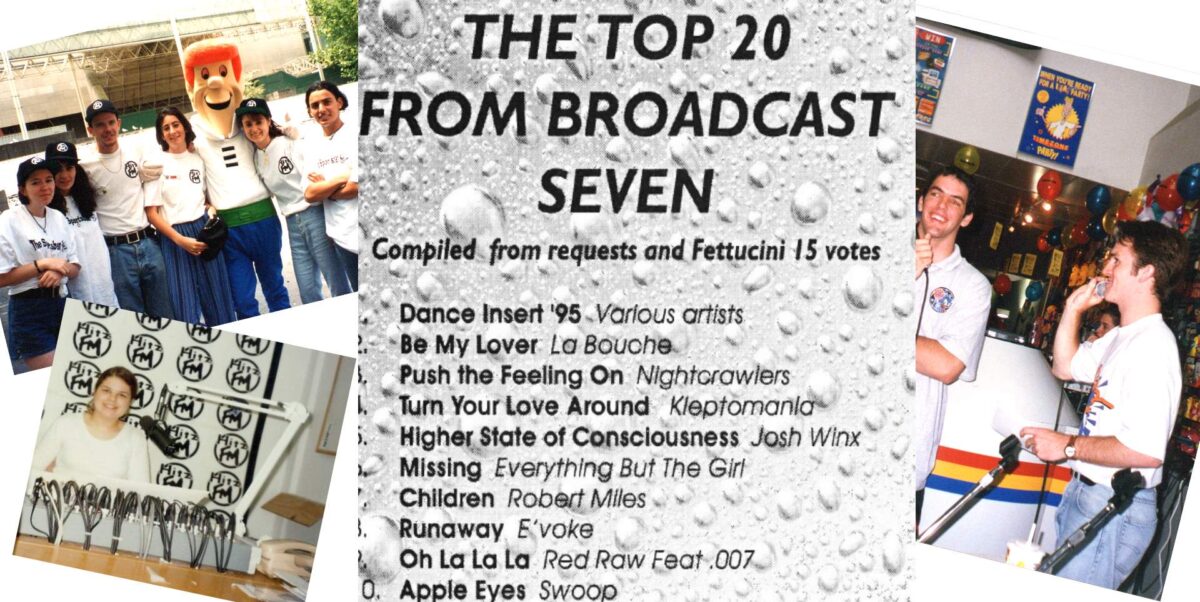 Some of my favourite Hitz broadcasts were the Summer ones. Number 1 (from John Gardner), number 3 (the famous one) and number 7 when I actually got to host the breakfast show! But we’ll get to that later.

Oh, and I’ve got a recording for you from that time too.

The 7th Hitz FM Broadcast kicked off late in 1995. It was the time of One Sweet Day (Mariah & Boyz II Men), It’s Alright (Deni Hines) and Stayin Alive (N-Trance). At the movies people were going crazy for Babe, Se7en and Ace Ventura.

Hitz FM was making a big change behind the scenes, that would shape the station for years to come. The new Music Selection Group was a group of 15 volunteers who’d steer the station’s musical direction. One of their first decisions was to boost the amount of alternative music played. Artists like Spiderbait (Alex the Seal), Pollyanna (Lemon Suck) and Ammonia (Drugs) were added.

Back in the studio, it was great to see a few of the team step up to bigger roles. Matt Orchard (The late night Australian Music Show) started also hosting the lunchtime request show. And Tina Foley (who’d started answering phones just two years earlier) was now hosting afternoons every weekday.

Meanwhile, a brand new breakfast show “Burnt Toast” began. And I was the host! I got to play some amazing music (my favourite tracks included Wrap Me Up, Children, Missing and Push the Feeling On). And I had a major sponsor – McDonalds!

I also got to think up my own competitions. My favourite one was “CrapBusters”. The theme music was taken straight from the Commodore 64 game Ghostbusters. (remember to follow the ‘bouncing ball’ if you click the link) In CrapBusters, I invited Hitz listeners to nominate the worst songs ever AND their preferred means of destroying the CD. We even had the owner of a pottery kiln call up, and offer to melt the most-hated discs!

It was one of my favourite times at Hitz. But unlike every other era I was involved in – I have zero recordings of it. Most radio people would KILL to host a breakfast shift for a month in Melbourne but I somehow forgot to record any. Why? Well my long-distance girlfriend (from Perth) was finally in Melbourne. And a new love had my attention.

Now, time for some streaming audio! Once again I have to thank Person X (who wishes to remain anon) for their incredible audio keeping over the years.

This tape is from a Tuesday afternoon in the broadcast. You’ll hear Rod ‘Talking Man’ Cuddihy doing drive and Tracey Wooding doing news (quite a surprise, she’s normally looking after music). The music starts and stops though – as it appears the recording came straight out of the studio desk (not off a radio). But you’re still sure to hear some songs you haven’t heard for 25 years!

As an added bonus (or not) the tape then has a segment with Matt Orchard, where I turn up as a special (?) guest! Well, if you ever wanted to hear my voice from back then – now’s your chance.

Hope you enjoy this slice of audio from early 1996!

When Hitz was first being put together, one of the fundraising ideas was to have a benefit concert featuring Jimmy Barnes and Angry Anderson.