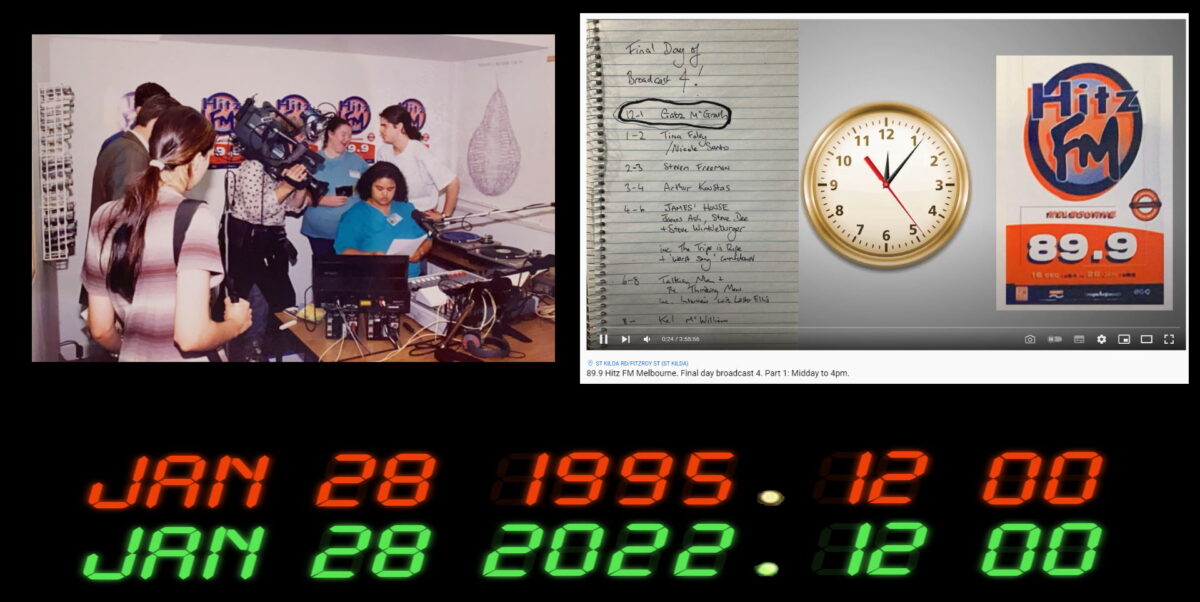 Forget the DeLorean. Don’t try to build your own time machine. I’m transporting you back 27 years RIGHT NOW – to January 28th 1995.

On this day in ’95, Hitz FM’s 4th broadcast was wrapping up.

It was the first time the station had been ‘on’ since its record-breaking Summer 93/94 event. Hitz had recently released its first-ever CD The Original Hitz which managed to hit number 1 in Victoria’s compilations chart and number 10 nationally.

Throughout the broadcast, there were tonnes of events including a ‘Go bowling with the Hitz DJs‘ party, a listeners’ river cruise and memorably, Paul & Adele broadcasting from Hoyts Highpoint – leading to the cinemas 2nd-busiest day on record. Plus of course the weekly nightclub broadcasts (Joy @ The Metro on Friday, The Factory @ The 75th Squadron on Saturday).

One of my fantastic audio donators had a Hitz FM “logger tape”. It’s a VHS tape that was recorded at the station with eight hours of audio. In fact, legendary comedian Tony Martin (The Late Show, Martin Molloy) has spoken about using the same VHS longplay recording method back in the 90s.

The recording started at 12:06pm on January 28th 1995. Yours truly was hosting from lunchtime. And over the next EIGHT HOURS you’ll hear some huge tracks from late 94/early 95. Annihilating Rhythm (Ultrasonic), Regulate (Warren G), Waterfall (Atlantic Ocean), Tomorrow (Silverchair), If I Only Knew (Tom Jones), Amor Serenade (Culture Shock), and Turn Me Out (Kathy Brown).

But there’s much more than music to discover. Some of the stranger highlights of the tape include James Ash doing a ‘worst songs’ countdown, an interview with boxer Lester Ellis (?) and rock jock Barry Bloke taking his dog Chisel for a walk.

You can watch the menu/clock changing as you move back and forth to find particular segments.

If you hear any fave tracks, I’d be interested to hear!

The first video covers Midday to 4pm as follows:

The second video covers 4pm to 8pm as follows:

Hope you enjoyed this great flashback to this time in 1995. There’ll be more of these coming up later this year.

Meanwhile, if YOU have any friends you suspect ‘might have some old Hitz tapes somewhere’ – please contact me!