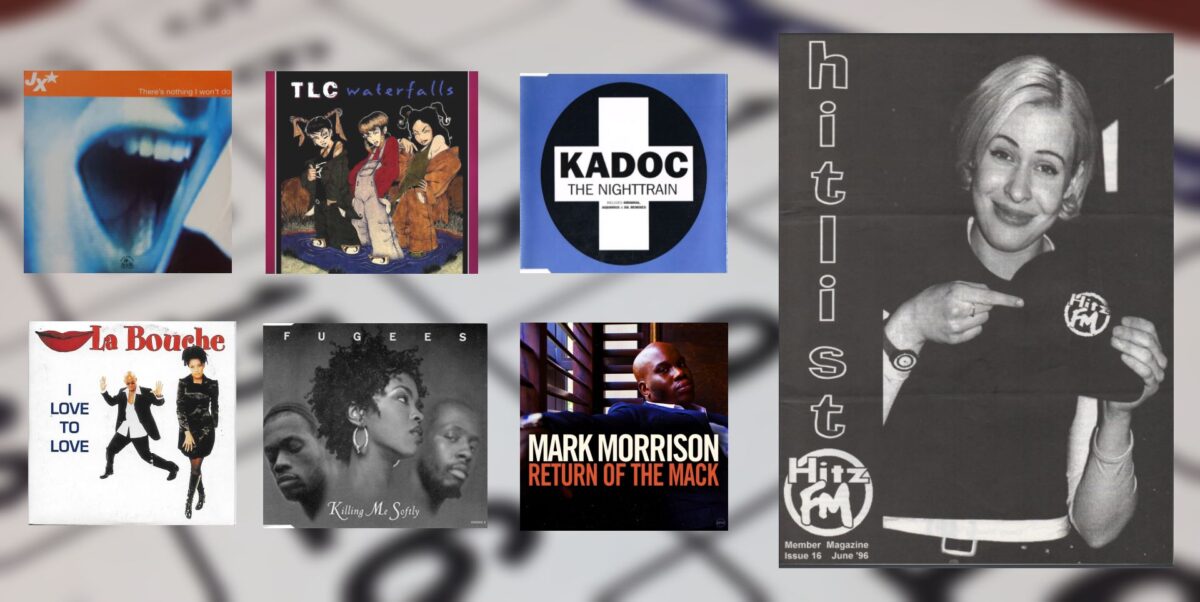 On TV.. fans of hot men and women in uniform had a choice of new shows… Jag or Water Rats. Comedy fans were loving Good News Week on the ABC and 3rd Rock from the Sun on Seven.

In the cinemas we were spotting flying cows in Twister, watching Tom take on Mission Impossible, laughing at The Cable Guy and going Trainspotting.

As the broadcast began, Hitz members could win some great prizes, just by completing a music survey… with the chance to win “One of five CD and videotape packs!”

Throughout the broadcast, Trent & Danny were doing the breakfast show. Mikey Griffin was on mornings and Tina Foley did the all-request lunchhour. Meanwhile, Michelle Little was on afternoons, and ‘The Talking Man’ did drive.

Weeknight’s it was James’ House. The show was hosted by James Ash, Crusty Shae and Steve Winkleburger – from 7pm weekdays. Highlights included interviews with top artists, and the show’s own soap opera “Scraggs Inc.”. And of course, The Hitz Power 20 Countdown.

Some of the big tracks of Hitz FM broadcast 8 included Killing Me Softly (Fugees), Return of the Mack (Mark Morrison), Macarena (Los Del Mar), I Love to Love (La Bouche), There’s Nothing I Won’t Do (JX), Waterfalls (TLC) and The Nighttrain (Kadoc).

Friday nights Hitz FM broadcasted live from The Metro. Then on Saturday night from 6 till 8pm, Mikey Griffin hosted Hot Hitz – a show that went out via satellite to 40 community radio stations around Australia. And after 8pm, Hitz was live from Inflation on King Street.

Thanks to awesome Hitz fan “ElektrikMusic“, we have a whole HOUR of Inflation broadcasting on Hitz in June/July 1996…

Meanwhile, Hitz also tried TV for a second time (via a show on Optus Local Vision) and expanded further onto the internet, implementing IRC chat with the announcers.

Finally, as the broadcast wrapped up on July 20, there was an all ages gig “License to Party” at Olympic Park from 6pm to 1am. The hosts crossed live to air on Hitz, with DJs, a fashion parade, food and more.

For more info – check out the Hitlist Issue 18 below. You can make it ‘fullscreen’ and flip through it like a real magazine.

3 thoughts on “Stream this from Winter ’96: Hitz FM broadcast 8”